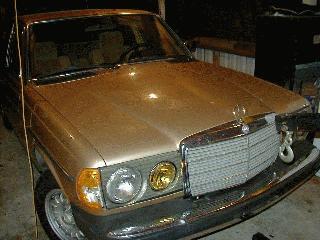 My 1982 300D engine swap project started this way: My brother Corley wanted to pay me something for doing some work at his house, and came up with the idea of getting a nice looking Mercedes 300D turbodiesel from a fellow he works with, then towing it from California to my house. So I acquired a very nice looking metallic brown 300D 4-dr sedan. The only problem was that it wouldn't start! Corley said the person he got the car from could always make it start by taking out the injectors and putting engine oil in the holes, then reinstalling them. He said that if it were driven daily it would continue to start, but if it sat for a few days the operation had to be done again. This was an indication of very low compression - a diesel engine requires around 300psi of compression to make enough heat to ignite the diesel, and if the engine has a lot of wear it just won't produce that compression! (I did check the glow plugs, which were working fine.) The car also had a great deal of blowby - in fact the engine compartment was very coated with diesel fumes and carbon deposits....also it had filtered into the passenger compartment, so the car wasn't the cleanest inside, to say the least. I checked out the possibilities of rebuilding the diesel engine, and the prices quoted were beyond my willingness to put in the project - $4000 for an overhaul at a local shop, and $6000 for a rebuilt engine from the Mercedes dealer. Scary, huh?

Well, I thought it over for awhile, and then remembered that I had a 4.3 liter Astrovan engine in the shop that I had purchased with the idea of installing in my 1977 Jaguar if and when the Jag engine gets tired, but so far the Jag is doing fine, and the engine was just sitting there. I got it for a song at the local U-Pull-It wrecking yard - $125 complete with computer and engine harness, as a "core" engine. (This means the wrecking yard didn't guarantee that it would run, just that it could be rebuilt. I saw the van it came out of, and it was in good shape, but hit in the side, so I figured the engine was most likely also in good shape. A few hours of careful measuring convinced me that the V6 might work real well in the Mercedes, so I went back over to the U-Pull-It and bought a "core" T700R4 transmission for what I felt was a high price of $450. I inspected all the transmissions they had for that price, and this one looked the best - the fluid was clean and smelled good, and the case had a rebuild tag on it, so I knew it wasn't as "old" as the tag said. (1986). I decided I better check out the transmission, because they had pulled the pan off at one time, and found that the filter was missing. I put a new filter in and replaced the front and rear seals.

Now for the really nasty hard part! I pushed the Mercedes into the shop, and by raising the hood all the way, was able to pull out the old engine and transmission without removing the hood. This left me with a very messy, dirty engine compartment! It took lots of elbow grease and cleaning solvent to get the majority of the goo out of the engine bay, but I finally got tired of cleaning about the time I could see the color of the paint in there. I purchased several Haynes manuals and Chilton manuals for both the Merc and the Astrovan, so I could learn all I could about both of them, and spent some more time measuring, etc, then decided it would be necessary to remove the steering stabilizer on the Mercedes tie rod AND remove 2 inches of the pan for clearance. I determined this by putting the steering all the way to either side and measuring the distance between the tie rod and the firewall. I added enough room for clearance on both sides and came up with my measurement. I took the pan off the engine, marked it with masking tape, and then carefully cut it with a cutoff blade in the power saw. Then I moved the cut piece back two inches and welded it into place. I added a 2-inch piece of sheet metal on the front to fill the hole that remained. This operation is easier to describe than to do - it's fairly thin metal, and I mig welded it so the pan wouldn't warp, and I wanted it to be completely leak free, so I actually welded it once, then ground it down with the hand grinder and checked for leaks by filling the pan with water and waiting for leaks (there were some), then rewelding all the leaky places, grinding it down again until I had a completely leak free pan. The result isn't very beautiful, but it's not warped and it doesn't leak at all. I painted it all with engine black, just like it was to begin with. The Haynes manual said I could reuse the pan gasket if it was in good shape, so that's what I did. It's a neoprene gasket, and is well designed. (NO leaks there either!) UPDATE - I was at the U-Pull-It, and noticed that a Blazer pan and oil pickup would probably work without modification, as it is already shaped almost exactly like the pan I modified.